Metasepia pfefferi is a cephalopod commonly known as the flamboyant cuttlefish (sometimes abbreviated to ‘flambo’). It is found in tropical South-East Asia (Indonesia, Malaysia, PNG and northern Australia). There is one other similar cuttlefish in the genus, Metasepia tullbergi or ‘paint-pot cuttlefish’, which is found from Hong Kong to southern Japan.

Flambos are benthic or bottom-dwelling creatures and prefer mud, sand or coral rubble substrates, at a range of depths from 3m+.

Like many cephalopods, the appearance of the flamboyant is highly variable (and beautiful) thanks to a sophisticated system involving chromatophores, iridophores and leucophores, which allow for instantaneous appearance changes.
Flambos can be camouflaged to match their surroundings or flash yellow, pink, purple, black & white in a rippling pattern. They can change both the colour and texture of their skin. Check out this link if you want to know more about how cephalopods change colour.
Bright colours can indicate fear but also excitement when hunting and probably also serve as means of communication between mates as well as to warn predators that they are toxic. At the moment when a flambo catches something to eat, it often flashes bright colours, perhaps as an expression of its delight.
Despite their beautiful colours and astounding ability to change their skin tone to blend in with their surroundings, it is thought that flamboyant cuttlefish, along with most other cephalopods, are colour-blind.

Males are much smaller than females. Females reach a maximum length of about 10 cm, compared to males which are usually 4-6cm long. Newborns are about 1cm long (3/8 inch) and are immediately able to hunt, walk, squirt ink, etc.
Their growth is rapid and they reach adult size approximately 4-6 months after hatching. 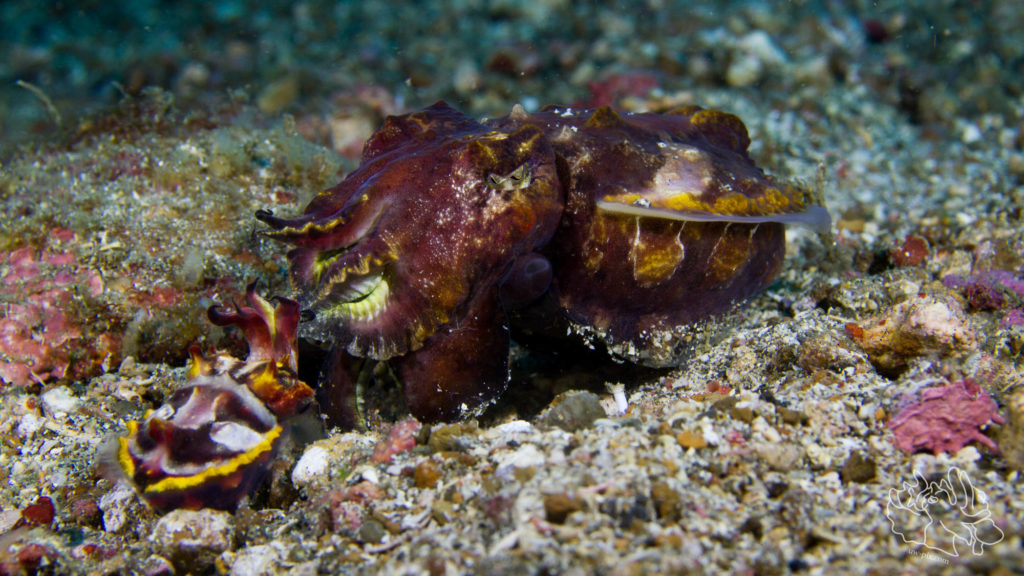 In the middle of eight arms, there is a small beak, which cuttlefish use to break open the shells of mollusks, crabs, and other crustaceans.
Like all cuttlefish, they also have two longer tentacles, whose ends are called tentacle clubs.  Tentacle clubs have flat surfaces with suckers, 3-4 of which are large and located in the centre of the clubs. They use these two elongated tentacles to grab their prey and they work in tandem, appearing to the casual observer like one unit.

In this picture the two tentacles are clearly visible

close-up of a tentacle club

Like all cephalopods, they have 3 hearts; one pumps blue blood throughout the body, and the other two, called branchial hearts, pump blood to the gills where they absorb oxygen as water flows into the mantle. This water is then pushed out of a tube called the siphon.

They eat crustaceans and bony fishes and are formidable hunters. They need to eat a lot to sustain their rapid growth, and later, to provide energy for egg production.
Once the tentacles have caught something and the cuttlefish has its prey firmly in its arms, the prey is brought to a beak-like mouth and a rasping tongue called a radula, both of which help reduce the prey to an appropriate size to be eaten.  Reducing the food size is critical because the esophagus runs through the middle of the cuttlefish’s ring-shaped brain; swallowing something too big might damage the brain.

Like most cephalopods, they are short-lived and have a lifespan of about a year in captivity. Although we don’t know for sure, it is probably similar in the wild based on research on other small cephalopods.

According to studies done at Monterey Bay Aquarium by Bret Grasse on aquarium-raised individuals, sexual maturity is reached at around 3 months and females begin laying eggs aged about four months. The older females lay larger clutches of eggs. Males have a modified left ventral (lower) arm called a hectocotylus for holding and transferring spermatophores. The male transfers sperm into the female’s buccal cavity and they mate head-to-head. The female takes the sperm with her arms and wipes them onto her eggs in order to fertilize them. She will then find a place to lay eggs, doing so one by one. They prefer to hide the eggs under coral, shells, rocks or on the underside of empty coconut halves. The eggs are initially opaque, white and round and become larger and more transparent as they develop. With immature embryos you can see the attached yolk sac (see photo), and if you are lucky enough to find embryos which are almost ready to hatch, you can even see them change colour. 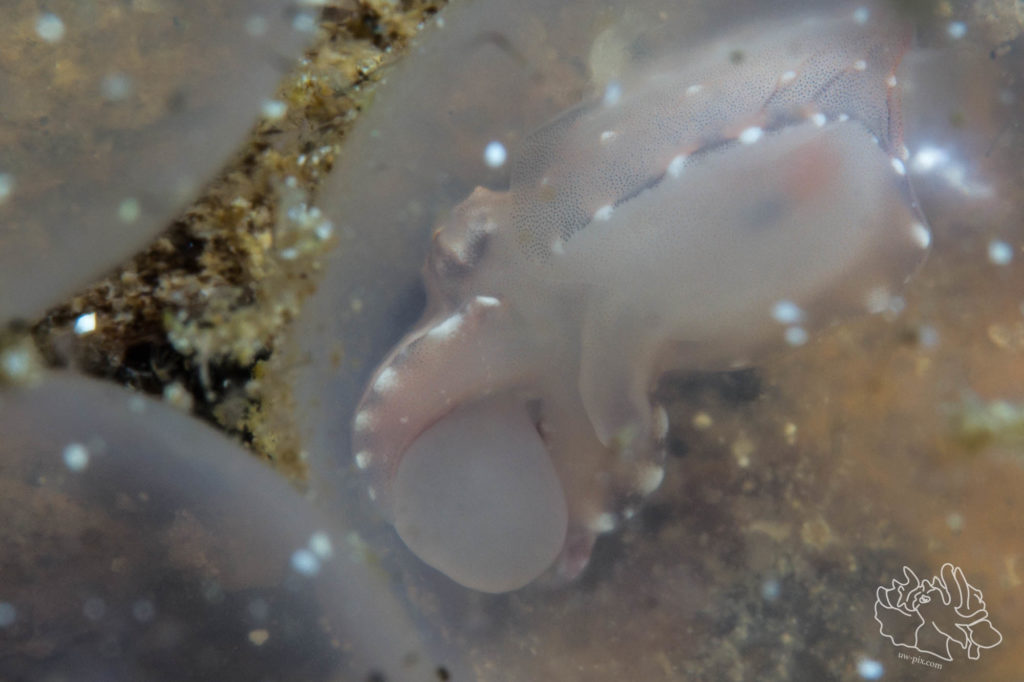 Flambo with yolk sack (the chromatophores are already clearly visible)

The incubation period usually takes between 3 to 4 weeks with an average of 25 days.
Flamboyant cuttlefish are polyandrous meaning the females usually mate with more than one male. One study (Metasepia pfefferi was not used in this study, but results may be similar) suggests that female dumpling squid which mated with more than one male had more offspring and larger, healthier offspring. Click here to find out more about this study)

We once had the honour of witnessing flamboyant cuttlefish courtship and mating. We first saw a large female and then located a male a few meters away. At first he seemed unaware of her presence and was walking slowly but suddenly he sensed the female and rushed directly over to her, flashing alternately white and bright colours. She seemed amenable and without much preamble, they quickly mated several times, each time lasting a short duration of just a second or two. After this, she ambled off to find a place to lay her eggs and started doing this immediately. She took several minutes to lay each egg individually, in this case on the underside of a shell.

Flambos mating. See the difference in size between female (left) and male (right)

Female flambo placing an egg under a shell

New eggs, no shape of flambo yet

Flambos, like other cephalopods, can produce a small, thick ink cloud when threatened to confuse predators. If this happens in response to you taking photos, back off – it means the animal is highly stressed.
It is widely believed that flamboyant have poisonous or toxic flesh, and if this is the case, its bright colours may serve as a warning to potential predators. However, to date, there are no scientific studies or evidence to prove this theory. Nonetheless, it is wise to exercise caution and never allow a flambo to touch your skin or bite you.

Unknown. I have not been able to find any references to what their predators in the wild are. I have never seen anything attack an adult, and even when I questioned some of Lembeh’s most experienced guides with many thousands of dives each, none of them had ever witnessed an attack on an adult. We have however personally observed hermit crabs and sea snails eating flamboyant cuttlefish eggs.

UPDATE: Watch these videos…I finally have seen something eat a flambo…

Unlike most cuttlefish, they walk along the bottom using two arms and specially adapted flaps on the bottom of their mantle instead of swimming. This is because Metasepia pfefferi has a smaller than normal cuttlebone. All cuttlefish have a cuttlebone made of calcium carbonate containing several chambers the cuttlefish can empty or fill with gas in order to adjust its buoyancy. Because the flamboyant has a small cuttlebone, they find it more difficult to adjust their buoyancy and cannot swim long distances.

Flambos are active during the day and are effective hunters. If you are patient, you can easily watch an individual capture and eat several ‘meals’ within a relatively short period of time.
They are solitary animals and only seem to associate with others of their species in order to mate, similar to octopuses.

The best lens to use is the 60mm macro as some of the females get quite big, so you can still get fairly close to the subject to avoid backscatter and particles between the lens and the flambo. For shooting baby flambos and eggs, we would recommend using the 100mm/105mm to give you a little more working distance (for getting the tiny babies you might consider an extra diopter like SubSee/SMC), or stick to the 60mm and shoot the whole coconut half or the whole coral with the eggs attached.

These animals are relatively unafraid of divers and if given a bit of space and are not harassed, they can be observed, photographed and videoed engaging in fascinating natural behaviours such as hunting, mating and laying eggs. Avoid stressing the animal by forcing it to flash colours with hand movements, and discourage your guide from doing so too, and you will be rewarded with fascinating glimpses into this most beautiful animal’s life. If they are stressed they just freeze and don’t do anything (they only flash the color for a few seconds), but once they start hunting, they often hunt several fishes/shrimps in a row and observing/photographing/videoing this behaviour is much more rewarding than just getting a shot of the nice colours (btw, they often show their colours just moments before striking to distract their pray). The bigger females are usually more camouflaged and not as photogenic as the smaller individuals, so especially there it’s even more crucial to be patient and get a behaviour shot. The most colourful ones are the newborns, they look just like a very nice candy :-).

Newborn flambo and some still in the eggs 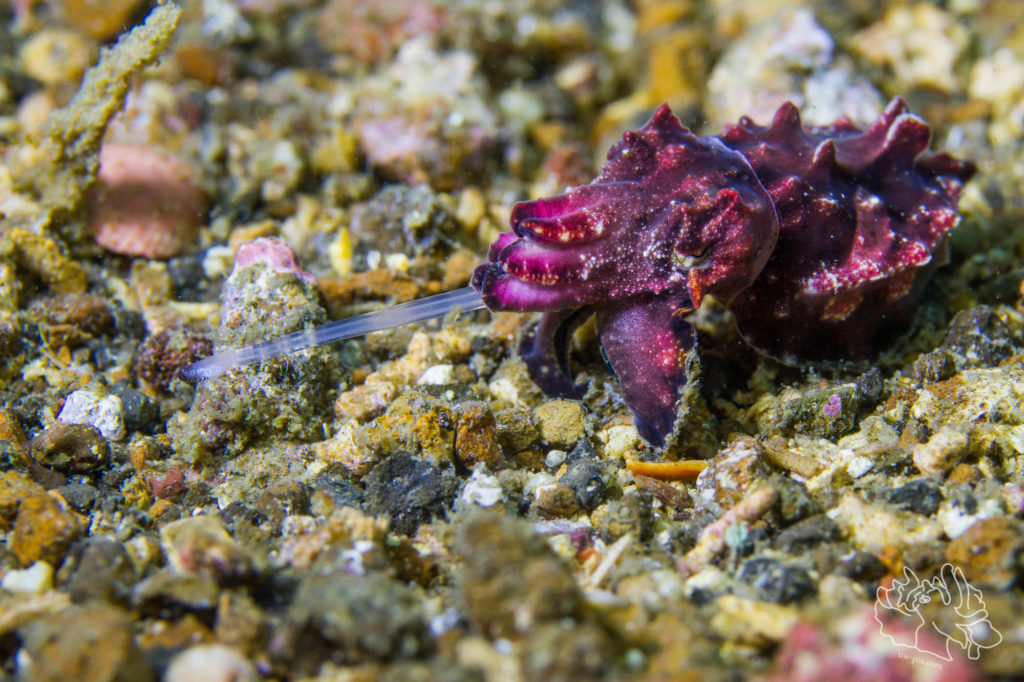 Watch this movie about the flamboyant cuttlefish

This article was researched at Lembeh Resort, all photos and videos where taken while diving with Critters@Lembeh.